We are excited to announce Mike Maimone as our Adopt-An-Artist for the Mile of Music festival in downtown Appleton, WI. Scheduled for August 5th through the 8th this year, the Mile of Music is returning for its eighth year to showcase up-and-coming music artists from all over the United States. Over 80,000 people enjoyed the one-of-a-kind festival in 2019, drawing national attention to the Fox Cities community.

Mike is a keyboardist, singer/songwriter, and producer from the Midwest. From 2009 to 2019, he was the frontman of rock trio Mutts, based in Chicago. Since then, Mike has relocated to Nashville and has been named a Lightning 100 Local Artist of the Week and "One to Watch" by the Nashville Songwriters Association International. 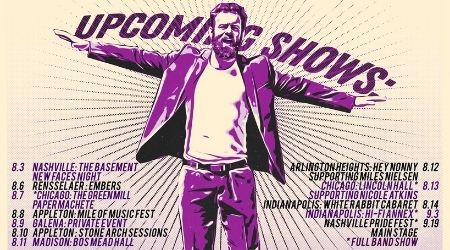 How long have you been writing and performing music? What was your inspiration to start your music career?

I started writing music in high school but did not play in bands until college with my friends. After college, we all did the sensible thing and got “real jobs,” but I still had a bug to be on stage and to create something new that was not there before. Because of this, I called up my college friends, and we tried to make a run at music. While everyone else wanted more secure jobs, I wanted to spend my quality hours doing something I loved instead of devoting my time to a job, so I continued to create music.

Who are your main influences?

I like the style and creativity behind Fiona Apple and St. Vincent’s work and the way their albums sound. If I am ever in a musical rut, I know I can put their music on, and I will be inspired. Another influence is Dr. John, as I like his style and think he is one of the coolest and funkiest piano players. Lastly, I appreciate Randy Newman's songwriting as it really resonates with me. His music acknowledges that life can be extremely hard, and he does not try to cover that up.

What inspired your last album: “Broke, Not Broken”?

I wanted to create a sound like Dr. John and Mario C., producer for the Beastie Boys, while incorporating the sounds of New Orleans pianos. I was influenced by some of my favorite rock and hip-hop groups and created a vibe that would get others on stage to start a party. With no intention, the songs on the album express the hardships of being in the music industry, but music is what I love to do and want to have fun with it.

How does it feel to be getting back on tour and performing at Mile of Music?

AWESOME. This year will be my 7th year at the Mile of Music, and I am always excited to go back. The Mile of Music creates supportive energy for musicians and brings in a great crowd. It is a great weekend to play among fellow performers and connect with old and new friends.

Catch Mike at the Mile of Music during these times: