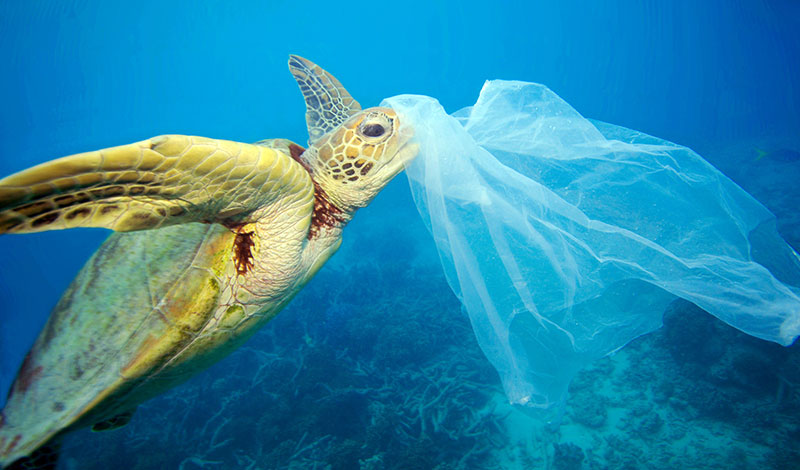 Packaging is the largest end use market segment accounting for just over 40% of total plastic usage. Most distribution centers and warehouses can easily create and throw away thousands of pounds of stretch wrap each year. Down gauging and proper measurements can eliminate excess waste and save a large amount of money.

Small Changes Can Have a Big Impact

According to Freedonia Group, the demand for stretch film in the US continues to grow by 3.8% annually through 2021, becoming a $2.7 billion market by that year. As the demand continues to grow, over 2 billion pounds of film is being used each year. It’s estimated that only around 6% of wrap is recycled. Plastic film can take anywhere from 10 – 500 years to decompose depending on its make-up.


Let’s compare these estimates to the stats on plastic straws, a current hot topic in much of the world right now. Plastic straws are about 4% of the plastic trash by piece globally, producing over 4 million pounds of waste. Over 182 billion straws (168,984,415 million pounds) are used per year. A straw takes about 200 years to decompose. Many cities and restaurants try to discourage plastic straw usage or have removed them all together. It may seem like a small change, but it all adds up and leads to larger changes.


Could you reduce your stretch usage by at least 5% this year? Although eliminating just 5% a year might not seem like much, imagine if every company across the United States was able to reduce its stretch wrap usage by 5%... Around 100 million pounds of stretch wrap could be removed from the waste stream each year!


Try our stretch film calculator: By not properly prestretching your film, it's possible that you are wasting more than 50% of your stretch film, resulting in large amounts of waste and money lost.

Encouraging end consumers to recycle and clean up plans can only do so much. Change must come from companies that are willing to do their part and be a leader for change in the plastic crisis. Why are we using so much plastic to begin with? Plastic is strong, cheap and light, which makes it appealing for many products and packaging, but it’s also what makes it so hard to break down.


At Rocket Industrial, we are constantly finding ways to help our customers create less packaging waste and reduce the negative impact plastics and other materials have on our planet. By offering sustainable alternatives, making equipment more efficient, and reengineering packages to use less material, we intend to make a difference and improve our waste stream. With technologies such as Packlytics to optimize stretch wrap usage and a goal of reducing a million pounds of over packaging each year, we are ready to work with you to Package With Less.