5 Upcoming Uses for VR in Manufacturing

5 Upcoming Uses for VR in Manufacturing 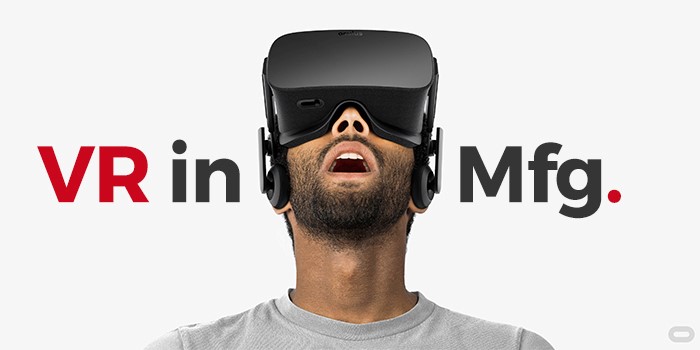 With the retail version of the Oculus Rift beginning its pre-order sales and estimated shipment in March of this year, It’s hard not to get excited about Virtual Reality technology. Science fiction becoming science fact has been a common trend for most of us as we continue to see new innovative gadgets released year after year. Even though the oculus rifts VR experience is marketed as entertainment (Ships with two games and a compatible XBOX One controller) virtual reality has mass potential to effect the manufacturing industry.


We’ve assembled a list of how 5 current VR projects/developments could be in your facility in the near future.


Imagine sitting down with your warehouse foreman to discuss a new warehouse layout. Now step into the environment with VR. A tablet acts as the design interface and connects to the VR visor which displays the digital warehouse. Virtually walk through 100 different configurations in an afternoon.

3D printing paired with touch sensors. Hold your new product prototype in your hands, see what it looks like on a store shelf, and put it through some virtual quality control tests.

This is an AR (augmented reality) head set. This type of vision allows the user to see the real world but with a digital overlay. Last year, Microsoft showed off a pretty neat video of someone playing Minecraft in their living room. However, in manufacturing, your service tech could see exactly what their client is seeing. They could diagnose and walk them through how to fix their machine from the other side of the country.

Forget needing to code out how your new manufacturing robot grips, grabs, and goes. Simply adjust it in a virtual space step by step to quickly and intuitively setup your manufacturing task.


Audi has created a 3D model of their latest car for user to explore. Peel apart the exterior and get a look into how the engine works or simply sit in the driver’s seat to see if there are enough cup holders.